For the first time in five years, nine students studying Public Services at Level 2 or Level 3 at the Church Road campus, took part in the parade, which was organised by Bracknell Town Council.

The Act of Remembrance

The Remembrance Service took place at the Angel War Memorial, outside the Princess Square shopping precinct, from 10:45-11:20 am, led by the Revd. Robin Sharples.

The Last Post was played on the Bugle to signal the beginning of the two-minute silence. The Bugler then played Reveille after the two-minute silence had been observed.
Wreaths were laid by the Deputy Lord Lieutenant, military, local scout and guiding groups, members of the public and the Reading Scottish Pipe Band.

Bill Kimpton read the Exhortation (Ode to Remembrance). Afterwards, the Vicar read the closing Prayers and invited other religious leaders to give their blessings.

Bill Kimpton read the Kohima Epitaph, signalling the end of the service.

The parade took place from 11:25–11:40am, following a route from The Angel War Memorial, through The Lexicon, past the Police Station and finishing at Holy Trinity Church. 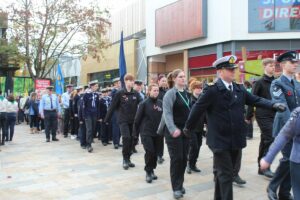 An honour to take part

Maya Byrom, aged 18-years-old, from Wokingham, was one of the students who took part in the parade.

She said: “It was an honour taking part in the parade and representing the college. It was quite something parading with all the cadets and Public Services students.

“Because we are a Public Services course, I think it is important to show our support and appreciation for the public services as we are looking to go into the Armed Forces and as we study them as well.”

Daniel Ellis, Public Services Teacher at Activate Learning, said: “The students not only did the college proud but themselves proud, and demonstrated the high values and standards expected of the various public services that they are aspiring to join.

“The students’ participation helps to reinforce the importance in remembering those people from our Public Services who have come before and paid the ultimate sacrifice to keep us, and our society safe.”

Find out about Public Services courses available to study at Bracknell and Wokingham College or contact Activate Learning on 0800 612 6008.

View all our news