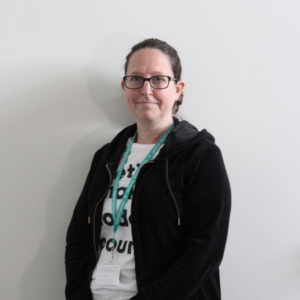 In celebration of Nurses’ Day, we spoke with Anne-Marie Benson, an Access to HE: Nursing and Health Professions student at Bracknell and Wokingham College.

We learned more about what inspired Anne-Marie to kickstart her career in nursing, as well as her journey with Activate Learning.

Changing her career after a cancer diagnosis

After a long battle with bowel cancer, Anne-Marie was inspired to become a nurse. Her personal experience with cancer was her inspiration to help others, as well as the care she received from her own Macmillan nurse.

“I just decided that it was time to readdress the things I couldn’t achieve at school. I’d been poorly, I’d had cancer, so it made me revaluate everything and what I wanted to do going forward.

“I’d said to my daughter when she was injecting me for my treatment that I wish I’d been a nurse or studied nursing. Once I’d recovered and realised that I was going to survive, I suddenly thought right, well I need to do what I’ve always wanted to do!”

Ambition to make a difference

Anne-Marie’s motivation came from reflecting on her own care and knowing her personal experience would be invaluable in supporting other cancer patients.

“It’s just crazy because I’ve been having cancer treatment for five years and I wasn’t expecting to survive because my cancer reoccurred. So, when I kept having clear scans, I thought I’m going to be forced back into work at some point and I really want to make a difference.

Anne-Marie was nervous about studying again and didn’t have her GCSE maths and English qualifications. She came in to speak with Nicola, the Access to HE: Nursing and Health Professions teacher at Bracknell and Wokingham College and was instantly reassured.

As part of her Access to HE programme, Anne-Marie is also studying GCSE maths and English in the afternoon. Initially, she was concerned about tackling these GCSE qualifications.

“It was like I’d already faced my worst fears and facing maths and English didn’t seem that daunting after that. I just thought, no, I’m going to do it.

“My other motivation was my daughter Daisy is dyslexic and I’ve got dyslexic traits as well and so I was always in the lowest set for everything at school. I came out with poor GCSEs and really struggled.”

Despite her concerns, Anne-Marie knew that undertaking her GCSE’s would support her Access to HE qualification and progression. Additionally, studying alongside her daughter has helped immensely. Anne-Marie can sympathise with Daisy and it has had a really positive influence on them both.

“I thought if we do these things at the same time we can study together, and it hopefully will have a really good effect on both of us.

Before enrolling at college, Anne-Marie hadn’t been in education for 30 years. She admits that initially, it was scary to start again.

“The first day or two, I could tell the whole class was tense because we didn’t achieve what we wanted to at school. The majority of us were older adults and that was a bit of a relief.

“It’s been quite a gradual process because you start off doing Nicola’s academic writing. Then you do three ungraded essays and start getting into the meaty graded essays. So, it’s a nice, gradual process that builds up. You feel initially daunted, but when you get going it’s very doable.”

Thriving in a supportive environment

With the ongoing support and guidance of her teachers and family, Anne-Marie’s confidence has soared while at college.

“I think I didn’t realise that I am quite intelligent. I’ve really had quite low expectations of myself, from school and I’ve surprised myself. With the right support, encouragement and guidance what can be achieved is great, it’s the most phenomenal thing.

“The teaching’s been really good. Nicola’s been awesome and really supportive. We get increments of one-to-one where we go through our progress and things like that. Nicola always responds to emails and queries, she’s just really approachable, knowledgeable and supportive.”

Anne-Marie appreciates the patience of her teachers and the additional support services at college.

“They teach you like you’ve missed loads which is obviously what happened. The lessons are clear, I never leave not understanding what I’ve learned.

“I’ve accessed Learning Support so much as to get some extra time. Because of the way the course is structured and essay based, I can take my time with writing my essays and use things like Grammarly. For me, I felt like that little bit of extra time would make a difference. I had an assessment and they were lovely. It was very straightforward and it takes the pressure off because my problem is recall.”

Embracing the community spirit at college

Anne-Marie loves studying at Bracknell and Wokingham College, commenting on the facilities, community spirit and diversity at Activate Learning.

“I’ve loved meeting new people. The facilities are great, and I feel really welcome. The college has a lovely community feel about it. There’s just lots of support available really.

“The other thing that I really like is the diversity. You’ve got children with learning difficulties, you’ve got adults and you’ve got younger people, which I think creates a better, well-rounded person being in this environment. It’s like a snapshot of what real life is.

“It’s really good because it promotes acceptance, doesn’t it? Everybody, regardless of race, age, gender, or ability, everybody is considered. You’re really well supported here.”

Advice to those considering re-entering education

Anne-Marie has advice for other adults who may want a complete career change but are worried about undertaking studies again.

“Don’t think about it, just get on and do it. I think the longer you think about facing things you struggled with at school, you’ll talk yourself out of it. Once you get your first lesson under your belt and you’re prepared to put in the hours and work hard, it is achievable.

“I think it’s just great, getting back into education, coming somewhere every day, meeting new people and conversing. I think that especially in lockdown, everyone’s been shut away.

Preparing to start university in September 2022

With great happiness, Anne-Marie is set to go to university on completion of her course. She is confident that she’s prepared for university study, having covered a diverse range of topics in her programme.

It’s given me a really brilliant foundation for university. I can’t imagine going straight into a university degree and not having the knowledge that I have now. I can see why people don’t succeed because you have to know what you’re getting into.”

Anne-Marie has secured various conditional offers and is set to begin studying Adult Nursing later this year with a view to becoming a Macmillan or stoma nurse.

She is delighted that she took a leap of faith and enrolled at Activate Learning. She is grateful for the support she has received from her tutors and the help with her UCAS application. We know she will make her mark as the #BestOfNursing.